Mr G txted me today and asked if I wanted to go out to an impromptu dinner with him and his workmate.  I’d had another one of those uni days that involved not sitting down for six hours (I’m not kidding), and no food between 6am and 2am.  The impromptu dinner was in the form of an all you can eat meat style at what I can only guess was a Spanish place because it was called La Parillada.

This was the perfect opportunity to wear my newly refashioned jacket, so I took a bunch of arty shots before I left.  They’re only arty because I found it really really hard to photograph it well. 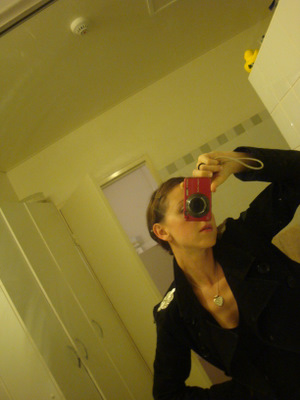 I’m really pleased with how it came out.  I wore a solid silver heart pendant my Mum bought me in Vietnam.  The jeweller did all sorts of copies of famous pieces – I’m glad she didn’t buy me any fake Tiffany’s.  Apparently this is a replica of a Georg Jensen piece but I don’t mind because it’s not recognisable as anything.   I found it vaguely reminiscent of dog-tags which fit in with the militaristic vibe without being too literal.  I don’t have a nice Communist bob so pinned it all back into a bun and channeled some sort of efficient female Major in the army meets Russian ballerina.  I do like how Benefit Moonbeam photographs, that was a nice surprise.

Dinner really was all you can eat meat.  When you finished one platter, you could request another.  We only made it through two between the three of us, and that was a damn fair effort.

The sauces were tomato, mild, medium, and very hot.  Mr G’s workmate and I got stuck into the very hot like there was no tomorrow. 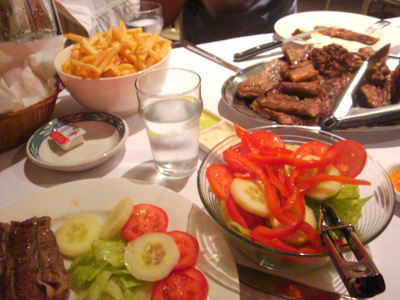 Basic yes – but you just cannot get better accompaniments to all that meat.  We had such a good time – I think it’s important to remember to do this stuff, especially when your career is running you ragged.  I completely forgot about my day and just stuffed myself silly.  But I suppose now it’s time to get back on the portion control and running bandwagon.  I don’t mind either, but sometimes it’s just wonderful to through caution to the wind and eat up a storm.